TOOTS and THE MAYTALS

Toots is one of the true architects of reggae – so much so that “Do the Reggay,” a 1968 single by Toots and his group, the Maytals, is credited with giving the genre its name. Classic songs written and recorded by Toots and the Maytals have been covered by the likes of the Clash and the Specials, and the group was featured in reggae’s greatest breakthrough event – “The Harder They Come,” the 1972 film that became an international sensation.

The all-star guests on TRUE LOVE range from legends like Keith Richards, Eric Clapton, and Bonnie Raitt to younger stars including No Doubt, the Roots, and Phish’s Trey Anastasio. The caliber of these collaborators reveals the impact that Toots has had on several generations of rockers and rappers, while appearances from reggae icons Bunny Wailer and Marcia Griffiths show the respect granted to the man who might be the music’s greatest living vocalist. At the heart of it all is that voice – drenched in soul, rooted in gospel, and still breathtakingly powerful after almost four decades in the spotlight. 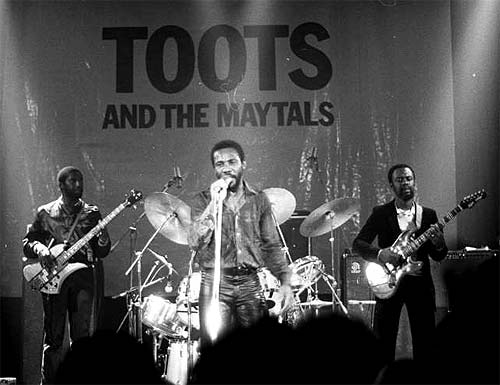 What did you learn about these songs by working with different people?

I learned that music is an endless thing, and it can modify and become huge. All these different artists, we are friends. I feel their spirit, they feel my spirit. And a younger generation can feel our spirit – when they sing a song, they could have something from me, something from the Rolling Stones, something from Bonnie Raitt, something from Willie Nelson.

What was the session with Keith Richards like? Everybody thinks that he’s the wildest man in rock ‘n’ roll.

Well, I know him, so there was no surprise. Him and Ron and Mick, the whole entire Rolling Stones. They like my songs and I like their style, love their songs. I even sing some of those songs that they wrote, like “Start Me Up.”

How was it to go up to Vermont and record with Trey Anastasio?

They have a fantastic studio. All of them are just like me, they don’t hype, they’re just who they am. And it was nice, because the air was like up in the mountains in Jamaica.

Does it seem like more of the jam-band kids who listen to Phish are discovering the Maytals’ music?

For a long time, when I tour, a lot of kids come to my show. Some of them don’t have the age to come in. I try to take them in, say OK, sit down there and there’ll be no drinking, there’ll be no smoking, and enjoy the show. So they enjoy the show, go home, tell their friends.

A lot of Phish fans come to my show – the Bob Marley fans, the Grateful Dead fans. The young people into my songs, and also into reggae music, often they listen to hip-hop, they have to come back and play some real reggae and learn some knowledge.

Right now there’s more popularity for reggae, with the Sean Pauls and the Wayne Wonders having big pop hits. What do you think of those records and their success?

Those kinds of things help a lot, Sean Paul and all the other hip-hop dancehall reggae artists doing their thing. I think it’s good, because even though reggae music is not about girls, it’s not about fantasy, they make reggae music to be what they want it to be, and it’s good to show that reggae can come in a different form. Younger people bring a different energy to it, and the older people, they bring the soul, more soul.

So let’s go back. They say that your song “Do the Reggay” gave reggae music its name.

People tell me that, but when I did it, I didn’t know. There was the beat in Jamaica, reggae was played long before I started singing. And there was a slang, like a nickname for someone who don’t dress properly – like if you are barefoot, people would call you “streggae.” They say “hey, that guy is streggae, don’t talk to him.” If a girl don’t dress properly, like don’t have on any top, they call her streggae. So one morning, one Tuesday morning, we just said “let’s go along and do some reggae.”

Those days we’d just make stuff up, anything. A bird flies around the corner, you write a song about it. So we just say (singing) “Do the reggay, do the reggay,” and that’s it. A few words, y’know? And nobody paid it any mind until it started to go all over the world. I saw it in the Guinness Book of Records. So I thank God that I did something good, and I didn’t even plan it.

“Monkey Man,” has been an anthem for three generations of ska bands, and it’s so great that No Doubt did it with you for this album. Why do you think that song is still so loved thirty years later?

After we did the record “Bam Bam,” there were a lot of politics going on. Some people believe I wrote the song for the other party, which we didn’t. Artists don’t business in politics. Anyway, some people tried to frame me. I didn’t have any ganja, I didn’t even start smoking yet. They didn’t have no cause to do that, but they found some cause. People try to do things to hold you back in life.

So they put me in jail for about nine months or so, and that’s where I wrote the song. They gave me the privilege of using my guitar. I didn’t have to do other work, just play guitar.

Now, so many hip-hop songs tell stories like that, but then, people didn’t really write about that kind of experience in their own life.

Sometimes I don’t want to talk about it. It makes me feel angry. But I realize it is good to tell people – and that if someone’s done something that’s bad, I don’t have to fight them, I can write about them in my song. And when they hear that song they can listen and think “Ohh.I did him something bad once.”

What do you think this project, with all these artists from different generations and different styles, shows about your songs and your career?

It was nice to show that I have many different ways of doing my music. It’s good that it was permitted to be done this way, because everybody is like one big family. They know my style, they love my songs, they have my record at their home. Some of them, we never met before – but when they hear my record it’s like “Yeah, man! I’ve been listening to Toots and the Maytals long time.”